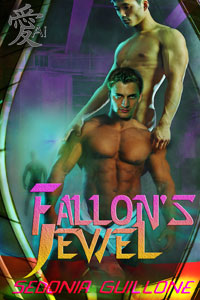 Kenji doesn’t know who he is or where he came from, only that he woke up one day, naked and alone on Terran A, possessing nothing in the world but a golden statue. All he knows is his survival, serving drinks to roughnecks in Spike’s bar for a living. The one bright spot in his life is Jake Fallon, a cop with Interstellar Patrol. Though Fallon is only another customer, Kenji senses something…different about him, something that pulls him from his solitary existence to passion in one night and Fallon is the only guy Kenji’s dared to experience the pleasure of sex – at least, he think so. When Kenji is attacked and pursued by a vicious bounty hunter one night, Fallon also becomes his only hope.

Fallon’s passion for Kenji mixes with his desire to rescue the beautiful man from danger. He’s already more than half in love with Kenji and falling deeper as the bounty hunter’s pursuit takes them from galaxy to galaxy. For the first time since his first partner was killed, Fallon dares to surrender his heart again. However, as their race for survival uncovers Kenji’s true origins, Fallon may have to let Kenji go in order for Kenji to fulfill the very purpose of his existence…

A gust of cooler air breezed through, pulling Kenji from a fantasy. He looked in the direction of the door, which had just opened, closing in the wake of yet another brawny patron.

The man—a stranger to him—checked his weapon.

This one was different. Kenji’s mouth went dry.

This one was hot.

By his clean-cut appearance Kenji guessed he was a cop. That was nothing unusual in this place. But there was something about the way he moved—deliberate—smooth, relaxed yet tightly wound, like he could spring in a second, that kept Kenji’s attention riveted.

At that second, the guy looked up. His eyes made a brief yet slow survey of the crowded room.

And then they landed on Kenji.

Kenji couldn’t tell what color they were from this distance, but he could feel them. They seemed to burn down into his very soul. They seemed to know who he was even when Kenji himself didn’t know.

Everything in the roomful of rowdy tattooed, leather-clad space junkies, space cowboys and bounty hunters receded. He was more captured than he was during one of his visions.

And then he began to walk toward Kenji, his eyes never leaving Kenji’s, his brawny torso flexing with each step.

Was it a few seconds or minutes before the guy stood before him, so close to his barstool that Kenji could see the dark stubble covering the strong line of his chin and jaw? So close that he caught a whiff of something spicy? Cologne that made Kenji’s groin tingle.

The man pointed to the empty stool. “Is this seat taken?” He had a nice smile and incredible eyes, the color of the blue through which Kenji was falling in his recurring vision. Yet in those eyes was a touch of sadness the grin didn’t dispel.

Kenji blinked. The stool next to him had been vacated within the last few seconds by the hustler sitting there. He must have gotten a hit and taken his customer to the back rooms. “I was saving it for you,” he heard himself say. And froze. What had possessed him? He’d never spoken like that to anyone.

A throaty chuckle. “That so “Well, this is my lucky night, isn’t it?” He seated himself and held out a hand. “Jake Fallon, Intergalactic Space Patrol.”

So he was a cop. Kenji accepted the offer of handshake. Warm. Strong. Nice. “Kenji.”

“Pleased to meet you, Kenji,” Jake Fallon said. “What are you drinking?”

Nice accent too. From England. On Earth. A bunch of the guys who came here were from England. Though they had a variety of accents, Kenji had heard this one before with its lightly rolled “r’s.”

Jake Fallon looked at him a moment. A tiny grin flashed across his nicely curved lips. “I see. Well, I’ll have that too then.” He signaled the bartender, causing the muscles in his back to strain against his T-shirt. Dan came and took his order, leaving Fallon free to turn back to him.

Kenji swallowed hard and stared down into the clear, bubbling water in his glass. His heart pounded and he wiped his palms off on his pants. “I’ve…never seen you here before,” he said. And almost slapped his forehead. How lame was that?

Sadness flitted through the other man’s blue eyes. “I haven’t been here in a long time.” He sighed just as Dan placed his order in front of him. Fallon lifted his glass, his sad look replaced with a grin. “As we say back in Manchester, cheers,” he said, and clinked it against Kenji’s glass.

Kenji watched Fallon take a drink, his head tilted back enough that Kenji could watch the muscles in his throat work as he swallowed. Shifting on his barstool, he hoped the other man couldn’t see the tightening in his cock, which started to push against his trousers. “You’re from Manchester?”

“Yeah, originally. But I’ve been flying through space for so long now I feel more alien than anything else.” He chuckled. “What about you?”

Kenji stiffened. Good question. Where was he from? He shrugged. “Around here.”

Fallon paused. Then a look slipped into his face, something that said, I understand, you can’t tell me. Lots of fugitives stalked the Terran outposts, secretive about their origins. They provided much lucrative fodder for the bounty hunters who’d proliferated with humankind’s reach into space. “No worries, Kenji. It doesn’t matter.”

Kenji remained silent and filled the moment with sipping his drink.

“In answer to your comment about not having seen me here before,” Fallon said, “I lost my partner a couple of years ago. A fire at ISP headquarters. This was a place we used to come on our nights off when we were in this sector.” He sighed and took another large sip. “I figured it’s about time to be getting on with things.”

That must be the sadness he’d seen in Fallon’s eyes. Whoever the dead man was, Fallon must have really loved him to have stayed away for so long. His fingers tightened on his own glass.

Fallon nodded. “Thanks, Kenji.” He sipped his drink, eyeing Kenji with a thoughtful expression. “May I ask you a personal question?”

Kenji’s heart thumped, but he shrugged, trying to appear casual. He didn’t know what else to do in his first real conversation with someone he was attracted to. “Sure.”

The other man tilted his head. “You seem…different from the usual patrons here. You’re more, um, refined. Are you…” he gestured toward one of the hustlers on the other side of the bar, a guy named Pieter.

Fallon grimaced. “Sorry. That was rude of me. I’m so out of practice.”

He smiled. No insult there. The hustlers were more refined looking for the most part. It was the contrast between them and their roughneck clients that got them paid. “No. I’m a bartender here. For the last few months.” He glanced down into his drink before continuing. “I usually leave after my shift, but I tonight I…was in the mood to hang around.”

Fallon leaned a bit closer, bringing that great scent with him. The energy of his maleness so close sent shivers through Kenji’s body, all the way to his toes. “I’m glad you waited, Kenji. I wouldn’t have met you, had you left.”

Kenji looked up. Again, Fallon was so close, their lips were mere inches away. Kenji caught himself tilting in closer.

Kenji jerked away. Bud had returned from the back room and now stood right behind Fallon, thumping him on the back in a rough greeting.

“Hi, Bud. Long time.” Fallon swiveled on his stool and offered the other man his hand.

Bud pumped Fallon’s hand and gripped his shoulder with his other hand. “Good to see you, man! Where ya been?” Before Fallon could answer, Bud turned a bemused look to Kenji then back. “You lucky fuckin’ dog, Fallon! Kenji here doesn’t let anyone within three feet of his fine little body.” He winked in Kenji’s direction. “I should know. I been trying to get him into bed ever since he showed up in this place. He resists me like the plague.”

Kenji frowned at him, his cheeks burning. “Behave, Bud.”

Bud grinned. “No hard feelings, Kenji. I know you been waiting for the right guy to come along.” He winked at Fallon. “He doesn’t come out and say that. It’s just obvious.” With a final shake of his head, he added, “You are in for a treat. Mm…mmm.”

How humiliating. Unbearably so. What would Fallon think of him now? He didn’t want to know. Best to get away. With a quick glance at Fallon, he mumbled, “Well, I gotta go.”

Without giving Fallon a chance to react, Kenji slid off the barstool and started to jostle his way through the press of smelly male bodies. But before he got more than two steps away, a large hand closed gently on his shoulder, ushering him around to press lightly up against Fallon’s broad front.

The corner of Fallon’s lips turned up in a sexy way. “Slow down, laddie.” His blue eyes searched Kenji’s, as if trying to read his thoughts. “What is it? What Bud said?” His large hand squeezed his shoulder. “The guy is a bit of a wanker but he means well.”

Kenji swallowed, finding it hard to speak for a second. He shook his head, trying to convey his agreement.

“Hey, don’t be embarrassed. I can’t think of any bloke who’d want to take him to bed.”

Kenji had to chuckle and Fallon’s answering grin made the remaining tension in Kenji’s body relax.

The next second Fallon’s grin evaporated and his eyes took on a serious look. “But, uh, if there’s any truth in what Bud said, then I’m flattered.” He squeezed Kenji’s shoulder again, the touch like a warm brand passing right through his thin white shirt and onto his skin.

Fallon’s hand moved from Kenji’s shoulder to his chin, chucking it. “So, do you like me enough to get out of here together?”

FALLON’S JEWEL by Sedonia Guillone may be one of my favorite novels I’ve read by her. Not only was I immediately caught up in the mystery about Kenji’s past; I fell in love with the heroes, Kenji and Jake. The intense emotional connection between them kept me enthralled with the story early on in the book and left me with a very satisfied feeling at the end of it….as usual, Ms. Guillone, swept me away in the love that Kenji and Jake shared between them. Plus, the mystery behind Kenji’s past kept me intrigued throughout the book. FALLON’S JEWEL is a very fast paced read and I loved every minute of it!

FALLON’S JEWEL by Sedonia Guillone has earned it’s place on my keeper shelf. I know I’ll be rereading this story for many years to come and whether it’s the second time or the twentieth, I have a feeling I will love this book as much as I did the first time I read it.