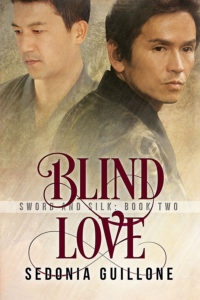 Hirata sighed and stared down at the parchment. His chest felt tight and sudden pain bloomed in his temples. Until this moment, he hadn’t realized how much hope he’d pinned on visiting the Guild. In his heart, he’d been sure somehow that he’d get the information he needed to find Sho.

It was not to be.

“Please do not apologize, Hoshi-san.” He fought back the emotions that threatened to burst out.

“You have been most kind. If I do not find them in the next two years, I shall return and see if he has reported in.”

Hoshi nodded. “I will certainly inform them of your search in case they return before that time. I wish you the best of fortune in your search, Morimasa-san.”

Hirata bowed, thanked Hoshi-san for his help and left the building.

A quiet place. The words rang in Hirata’s mind. Such a place could be anywhere, most likely not in a town. But where? In the forest? The mountains? Where in the world would he begin to look for Sho?

Hirata stood in front of the Blind Men’s Guild, feeling completely lost. The answers he’d hoped to gain had not only been unavailable, but his visit to the Guild headquarters had left him with more questions.

Why had Zatoichi been so insistent on taking Sho for his apprentice? And what was this quiet place the anma took Sho to?

Hirata sighed and began to trudge down the middle of the dirt road. The late afternoon sun slanted over the curved eaves of the buildings, casting shadows over the tiles. He’d need to find somewhere just outside the city to spend the night, in a wooded spot where he could make a fire. Not wanting to spend all the money his father gave him too soon, he’d decided to avoid staying at an inn except in the coldest weather and poached game here and there instead of purchasing food in the towns he passed through.

The main problem Hirata had as he made his way back along the Tokaid? Road was that even though quite a few of the anma he met knew of Zatoichi and remembered that he took a young boy as his apprentice, no one knew the boy’s name or knew of a young anma named Sho who would have just two years left of his apprenticeship. It seemed as if Zatoichi and Sho had simply vanished.

When Hirata reached Edo once again, he searched the theater district and Yoshiwara, the pleasure quarter, the areas of the city where many anma plied their trade. Yet again, no one he spoke to knew of Zatoichi’s whereabouts or of the existence of an anma-in-training named Sho.

Hirata continued his search along the other four of Edo’s five great routes. He travelled the entire length of the Nakasend?, the K?shu Kaid?, the ?shu Kaid? and the Nikk? Kaid?. He travelled through one season after the next, his passage marked only by the thickening of the muscles in his body and of the beard on his cheeks and jaw.

When the last of his father’s money had been spent, Hirata relied either on the kindness of monks in temples to allow him shelter and a bowl of rice, or on brief periods of employment that enabled him to buy food and then shelter when the weather turned too cold to sleep outside. He did any odd job he could find, chopping and piling wood in exchange for bowls of rice and a place to sleep, thatching roofs, repairing tools, anything that was available. In this manner, Hirata worked his way along each route, finishing one then returning to the next, and so on.

Until he once again reached the K?shu Kaid?, which ran through the province of Kai. The winter had just passed and there had not been as much work and food. Hirata rubbed his neck as he trudged slowly toward the post-station up ahead. His beard, heavy and thick needed shaving. His body ached, grown thin from not enough food. His clothing was ragged and his soul was parched as his throat. He was a few months shy of his twenty-seventh year. He’d left his home in Edo nearly ten years earlier and was no closer to finding Sho than he was at the beginning. Let Sho find me.

The thought echoed through his mind from an unseen source. He stopped in the road, barely aware of the peasants passing him with an oxcart full of baskets on one side and a samurai entering the post-town on his other side. All this looking, all this searching and traveling had not led him to Sho.

He needed to rest. He needed to wait. He needed not to give up but to give up this forceful quest that was doing nothing but laying waste to his body and soul. The seventeen years since Sho had been taken from him were robbing him of his will to live.

Had Sho even given him a thought? The way he’d disappeared from existence? Had Sho told Zatoichi about his friend or asked Zatoichi if he could pay a visit?

It didn’t seem so.

Hirata pushed back tears and resumed his trudging walk toward the town.

A small crowd gathered around the announcement post at the town’s entrance. In spite of his exhaustion, Hirata found his curiosity roused. There were always people reading the shogun’s announcements, but the greater number of folk staring at one of the sheets on the post drew him. Wanted. Gang of five ronin. Last seen in Kai Province. Dangerous! The announcement read and gave the names of the five men who were believed to have murdered more than ten people in their homes and shops after robbing them.

In spite of his exhaustion, Hirata’s insides clenched. Why were there such people in the world? No doubt that meant there would be plenty of work for someone like him as a yojimbo, bodyguard. He had only a few coins left, enough for food and shelter for a night.

At an inn, Hirata took a room, had a bath and washed his clothes. He ate and slept, planning to head into the castle town of Kai the following morning. He took care with his dress so that he would look acceptable to prospective employers. He’d heard on his travels that the castle town of Kai had developed in recent times into a thriving little city, and no doubt the competition for employment would be fierce. He abandoned his gaiters for wide-legged hakama pants, topped by his matching short kimono and outer jacket. An extra coin hired a valet to give him a shave and to wash and comb his hair, after which the valet applied wintergreen oil, gathered his shoulder length tresses up to the crown of his head and wrapped a tie around it so that the end stuck out like a tea whisk. Only then was he ready to head into the castle town.

He spent the early part of the day wandering around, familiarizing himself with the streets. There was the merchant district that sold rice, saké, paper and other such goods. Inns and guesthouses lined one street near a tiny theater district flanked by teahouses and geisha houses. And of course, around the corner, in the area where the saké merchant brewed and stored the barrels of rice wine sold to the inns, and the other merchants stored their wares, lay the telltale dark gambling parlor, its timbered entrance marked by wide noren curtains.

The town was ripe for employment, even in these times when the swelling population of unemployed ronin made gainful work ever scarcer. He could probably even procure several employers all at once, shopkeepers and other private citizens who would want him to stay on their property, guarding them against this current threat. He would have food, shelter and steady work all at once. A welcome rest from endless roaming.

Hirata stood a few moments, staring at the noren curtains hanging in front of the entryway to the dice hall. He had no desire to offer protection services to a bunch of bakuto throwing dice. He’d even heard that Shogunate officials sometimes hired the dice players to win back laborers’ earnings from them. What the laborer broke his back earning all day, he ended up losing at night. Best to go back into town, get something to eat, and then see who was hiring protection. Shaking his head, Hirata started to turn.

An anma had just rounded the corner and trudged in measured steps, using his cane to guide him, right toward the entrance of the dice hall.

Hirata stared at him. The anma was young. But not very young. Old enough to have reached his twenty-seventh year.

Heartbeat rising, Hirata took a few steps. The anma had nearly reached the front platform. Up this close, Hirata could see his face quite clearly. His breath hitched. His heart lurched.

Hirata was certain of it. Seventeen years had not erased the delicately chiseled structure of Sho’s face, his high forehead, arched brows, and aristocratically rounded cheekbones and lips. Even though Sho’s hair was shaved to a mere shadow over his scalp, Hirata could envision him with the long sleek hair of his childhood and see his long lost friend.

Before Hirata could speak, the anma halted. He tilted his head first one way then the other, just the way he used to do when they were children and he was listening to a sound far away. Hirata’s breath caught. He stood, frozen, as if Sho were a deer he’d been hunting and was afraid to frighten off by the slightest movement.

The anma turned slowly in Hirata’s direction. “Who’s there?” he asked in a low tone. Suspicion emanated from him.

Hirata approached him cautiously. “Sho, is that you?” Suppressed joy made his voice tremble.

“It’s Hirata. I’ve…been searching for you.” He watched Sho’s face for signs of recognition, for the joy of reunion to sweep over his beautiful features.

The anma stood, his head still cocked. His brow furrowed and then he straightened his posture. “I’m sorry,” he murmured, “You must be mistaken. I don’t know anyone named Hirata.” Tapping his cane in front of him, he found the step up onto the porch of the building, passed between the hanging curtains and disappeared into the shadows of the dice hall.