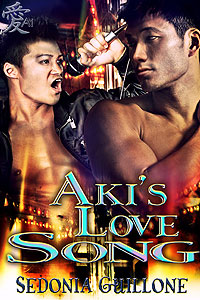 Since high school, Tamotsu has watched his best friend Aki grow from a rebellious but musically talented teenager to one of the most popular music artists in Japan. Though he’s been secretly in love with Aki for years, enduring the endless string of admirers Aki takes for lovers, Tamotsu suffers silently because he knows deep down that he is really the one person in the world Aki turns to for true friendship and solace.

But when Aki unveils an unknown and haunting love song he’s composed in secret during a concert, Tamotsu fears that Aki has finally found someone he can have a lasting relationship with. Only such a deep, abiding passion could inspire a song that beautiful.

Is Aki really saying good bye to him in the only way he can, through his music? Or is Aki telling Tamotsu something else?

Unedited — may differ from final version.

As usual, Aki was magnificent. Sweat gleamed on his flawless torso, most of which was exposed by the flimsy costume of black leather straps criss-crossing his lean muscles. Aki’s ass and thighs looked poured into his tight leather pants, the black of which only emphasized the perfect roundness of each ass cheek. His Fender Jaguar moved with his undulating body as if the two were fused together. Each movement caused Aki’s ass to strain in the most mouth-watering way.

Aki’s silver-tipped black hair stood out in exaggerated spikes, like the mane of a lion emerging from the dark side and the heavy black eyeliner circling each large, chocolate brown eye gave Aki the appearance of a wild, seductive demon coming to enslave those who desired him.

Tamotsu stared at him from his customary spot in the sidelines. Though his role as manager of Spider’s Web was to make sure everything went smoothly, once Aki got on stage, his slim lanky musculature emphasized by the dramatic lighting stole Tamotsu’s attention.

The way Aki had already stolen his heart.

True to the name of Aki’s group, every one of the fifty-thousand screaming fans in the stadium was ensnared in Aki’s web, trapped by his intoxicating mixture of flawless physical beauty and existentially jarring music. To listen to Aki’s voice of creamy velvet, to watch his graceful body wind and bend under the lights, and to see the blend of vulnerability and angst in his eyes was to become his prisoner. Aki became a drug one couldn’t live without.

Aki was playing one of his greatest songs, “Wildfire,” and had just reached the bridge. The fans’ screams increased in volume, rising with the cascade of sounds Aki released from his guitar. Aki’s own passions drove him to his knees, head thrown back, spikes of hair waving with the thrashing of his head. Eyes closed, Aki’s rippling torso undulated with the riffs he played. Aki’s demonic yet innocent nature poured from beneath his plucking fingers.

Tamotsu’s heart sped up. Aki absorbed him, made the entire world vanish except for Aki. Truthfully, it had always been that way, from the first time Tamotsu met him in the Music Club freshman year in high school. Even then, before Aki’s wild hairstyle and eyeliner, dressed in the navy blazer and striped tie of their school uniform, Aki was, in Tamotsu’s eyes, an artist who’d been completely overlooked by his family. They’d seen only the kernel of his musical talent and had driven him in the classics, forcing him to practice the piano hours a day. By the time Aki was sixteen, he rebelled, pulling Tamotsu into his world by asking him to play drums for the underground band he was forming.

In spite of his own painful stage fright, Tamotsu immediately accepted and had the time of his life for four glorious years playing clubs late into the nights on weekends. He’d wanted that life to go on forever, until he and Aki were old men, getting onto the stage with their walkers. The only painful part had been suffering silently in his love for Aki who of course, had scores of girls—and guys—following him around like love-starved puppies. Aki had a steady supply of companionship and sex, whenever he wanted it. Tamotsu bore it as the price of his flourishing friendship with Aki. He was the one Aki came to for solace, whom Aki hung out with when he wanted to completely relax and feel safe. Even when Tamotsu had been forced to leave the band and take over his ailing father’s tatami mat dealership, Aki came to him. The connection between them hadn’t ever been lost and Tamotsu couldn’t bear to think of life without Aki.

So when Tamotsu’s father died and Tamotsu eventually sold the business, Aki had asked him to manage Spider’s Web. Of course, Tamotsu had jumped on the chance even though it didn’t mean his passion for his friend would be requited. Tamotsu never wanted to violate his special place in Aki’s life, so he’d kept his mouth shut for more than twenty years. Even though it meant not being in Aki’s bed.

Now they were both thirty-six and things were the same.

“Wildfire” ended on a wailing screech of Aki’s deft fingers over the steel strings. The last note of the song reverberated through the stadium, drifting away as if fading into a mist. The note died away, leaving only the screaming voices of the fans. Aki remained where he was, head thrown back, eyes closed, hands frozen on the guitar. Were he anyone else, the pose would have come off as melodramatic, but Tamotsu understood his longtime friend. Aki poured his whole heart and soul into every note he composed as well as every movement he made. Everything was significant to Aki, even the way his knees touched the floor, as if he wanted to take root there and never have to leave. The stage was where Aki felt alive, in control, seen and appreciated, desperately trying to make up for the horrifying invisibility he’d suffered in his family.

You’re never invisible to me, Aki-chan, Tamotsu thought, watching Aki open his eyes and slowly rise to his feet amidst the din of cheers from his fans. If Aki could just feel, just once, how much Tamotsu loved him, perhaps he’d understand.

Tamotsu sighed and continued to stare. Aki was moving to the microphone, one hand raised in acknowledgement of the appreciation showering the airwaves. He gestured to his fellow band members, causing the cheers to escalate with each man he indicated. Aki was humble that way, always appreciating how the other musicians completed their sound and image. Without each and every one of them, Spider’s Web wasn’t. And Aki knew it.

“Thank you! Thank you so much!” he said into the microphone.

Cheers and yells met Aki’s words. Aki waited several moments, hand up, for the tumult to calm a bit before continuing. “Friends,” he began again, “Tonight, I’m playing a new song, one you’ve never heard before. I wrote it from the deepest place in my heart.” His hands went to his guitar, one on the neck, the other in placements over the strings.

Tamotsu frowned. A new song? As far as he knew, the band’s repertoire on this tour held only songs from their previous albums, the most recent of which had been released nearly eight months earlier. Aki had never mentioned playing a new song during this concert.

“I call it, “Because You’re Here.” Amidst the rising tumult of cheers, he strummed across the strings, a cascade of notes at once eerie and soul-searing. The lights faded to black, leaving only one halo of glowing light around Aki, now a solitary figure in the center of the stage.

“Sedonia Guillone has a very special love story in AKI’S LOVE SONG that blends friendship and love into a seamless thread that kept me wanting more. I was so touched I found myself teary-eyed in a few places in this short but touching story. It is so beautiful to see a deep friendship blossom into the love of a lifetime that I didn’t want the story to end. I found Aki both romantic and sweet, and Tamotsu to be a strong, kind friend. They both would sacrifice anything for the other. What they both need is the other. When you want a M/M story that will touch your heart, AKI’S LOVE SONG is the story for you.”