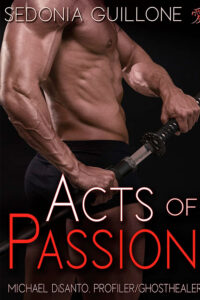 In an apartment in Boston, a body is found, presumably having committed suicide in tradition Japanese hara kiri fashion. However, forensic evidence suggests it’s not suicide and Boston homicide detective Jack Cade suspects murder. He calls on the criminal profiler he’s always relied on but the doctor’s health is failing. The older man sends in his protege, a new arrival from California, a promising, brilliant criminal psychologst, Michael Di Santo. Cade is skeptical of the new guy. He seems so absent-minded and neurotic to be effective. But he is brilliant and hot and Jack finds himself falling, hard and fast both in lust and in love. The attraction is mutual, although Michael’s past demons haunt him, keeping him from getting too close. Together, they begin to unravel Michael’s emotional knots even as they close in on the killer, another brilliant wily person whose sights are now set on Michael…

Publisher’s Note: This book was previously released at Ellora’s Cave.

Read more about the young Michael Di Santo in THE BOY ON THE LAWN.

Jack noted down the information, thanked Tyson and went downstairs. At the front entrance to the building, he noted a security camera trained on the glass door. Aside from that, there seemed to be no other security. The building only had twelve apartments in all. It was in a nice area on Boylston Street. Not cheap. Kent drove an expensive car according to the key ring Mallory had found in his pants pocket, and yet the furnishings in the place aside from the TV and stereo the neighbour said Kent used a lot of the time, were cheap and ugly.

He went down the front walk of the apartment building and turned to face it. The stone walk to the glass front doors was lined on either side by planter boxes full of purple and pink impatiens. Crime lab workers and patrol officers moved around on either side of the yellow crime tape, keeping the front of the building cordoned off until Jack gave the instructions to clear out and retain only the apartment as the crime scene.

Jack stepped aside to let someone go past him and bump! Smacked into something.

“Excuse me.” Or, rather, he’d bumped into someone.

Jack turned and saw who it was. A man adjusting the glasses Jack had just apparently knocked off his face. “You’re in a crime scene,” Jack said, just as the guy straightened his glasses and looked at him.

“Yes, I know.” The skin on his forehead crinkled. The almond-shaped brown eyes seemed to study him from behind his round lenses. He looked Asian and sort of…not Asian at the same time. Dark brown hair styled in a conventional way, parted on the side, short layers which reflected the light. Crumpled navy suit, diagonally-striped tie against a light blue dress shirt, as if his mother had dressed him for a spelling bee at school.

Jack blinked. He was taking absolutely too long to find out who this man was. Then light dawned, tipped off by the professorial look of the guy. Of course. “Dr. Di Santo.”

“That’s me. Hope I didn’t break your glasses.”

Di Santo touched them on each side as if to check. “No, they’re fine.”

Jack watched the man’s hands as he gingerly touched the frames. Nicely shaped fingers. Clean trimmed nails. “Sorry I bumped you that way.”

“No problem.” Di Santo cleared his throat. “I hope I can be of help to you.”

Jack started. “Yes.” He cleared his throat also. “This way.” He led Di Santo into the building and up to the apartment. “As I told you on the phone, I’m not so sure this was a suicide.” He let Di Santo precede him into the apartment and followed him, observing the way the slim man took in the surroundings in his way over to the victim.

For what seemed a long time, Di Santo wandered about then stood in the centre of the room, his gaze on the coffee table. His hand went into his jacket pocket, pulled something out which he popped into his mouth.

Jack watched him. Watched the man’s cheek bulge on the side while he sucked on whatever it was in his mouth, his gaze intent on the coffee table and victim. He then approached Jack and Jack heard the click of hard candy against the guy’s teeth. Very strange.

“You’re right, Detective Cade,” he said, still peering around him. “You observed well. This man probably didn’t kill himself.” Without waiting for a response, he turned and knelt by the body, now covered with a thin sheet.

Jack watched him. He saw the professor’s eyes widen, especially on the victim’s hands around the hilt of the knife. “What is it?” he asked Di Santo.

Di Santo seemed to ignore his question, staring at the knife. “Please open the robe, so I can see the wound,” he said to Murphy.

Murphy did as he asked and Di Santo gazed for what seemed five straight minutes at the vicious cross-shaped cut in the centre of the wound.

“Jumonji giri,” he said, nearly in a whisper.

“What?” Jack looked between the knife wound and Di Santo.

The hot-yet-nerdy man was still staring down, seeming to ignore him. The bulge in his cheek clicked several times against his teeth.

Michael Di Santo looked at him, his eyes seemingly far away yet intent at the same time. “What kind of movies did this man watch?”

“What?” Jack felt a jolt of annoyance under his collar. “What does that have to do with anything?” Dr. Wittig had never worked like this. He’d had his quirks while doing his profiling work but he was at least…normal.

“I saw some DVDs on his shelves. He obviously spent a lot of time watching films, probably over and over again since he actually spent his money on purchasing them instead of renting from the library. What are they? I assure you it matters.”

Jack exhaled. If Wittig had recommended this guy to replace him, he’d at least humour him until he saw a reason to do otherwise. Rising, he went over to the shelves and looked at the titles. Tough guy action films, a few dippy romantic comedies, and heavy metal music concerts from the eighties made up the selection. Everything very ordinary. He went back and reported what he’d seen.

Sedonia Guillone is one of those authors who is an automatic buy for me. Not only do I absolutely adore her heroes, but she also writes interesting and heartfelt stories that I thoroughly enjoy. So, when I saw that her newest book, ACTS OF PASSION, was available to review I jumped at the chance to read it and boy am I glad I did! ACTS OF PASSION is filled with romance, suspense and enough Japanese folklore that kept me enraptured with it from the first sentence to the last word.

ACTS OF PASSION was a fast-paced read for me and I really hated to see it come to an end. I’m looking forward to reading more from Ms. Guillone and just like several other books written by her, ACTS OF PASSION will be firmly placed on my keeper shelf so I can enjoy it for years to come.

1 thought on “Acts of Passion”